Albert Einstein born 14 March 1879 in Germany and died 18 April 1955, in New Jersey, U.S.he was a German-born theoretical physicist, and a mathematician by profession.he developed the theories of relativity and won the Nobel Prize at physics in 1921 for his explanation of the phenomenon known as the photoelectric effect. Read 154 Most Famous Albert Einstein Quotes.

Einstein is known as an original free-thinker, speaking on a range of humanitarian and global issues. He also spoke out against the use of a nuclear weapon. Einstein published his first scientific paper in 1900, and by 1905 had completed his Ph.D. entitled “A New Determination of Molecular Dimensions.” In the 1930s, Einstein’s theories, including his equation E=mc2, helped form the basis of the development of the atomic bomb.

The Invention of Albert Einstein

“Unthinking respect for authority is the greatest enemy of truth.”

“Education is not the learning of facts, it’s rather the training of the mind to think.”

“I speak to everyone in the same way, whether he is the garbage man or the president of the university.”

“Never give up on what you really want to do.”

“The person with big dreams is more powerful than the one with all the facts.”

“Only one who devotes himself to a cause with his whole strength and soul can be a true master.”

“For this reason mastery demands all of a person.”

“Common sense is the collection of prejudices acquired by age eighteen.”

“I am thankful for all of those who said NO to me.”

It’s because of them I’m doing it myself.”

“A ship is always safe at shore but that is not what it’s built for.”

“Imagination is more important than knowledge.”

“He who can no longer pause to wonder and stand rapt in awe, is as good as dead; his eyes are closed.”

“I have no special talent.”

I am only passionately curious.”

“It has become appallingly obvious that our technology has exceeded our humanity.”

“I am by heritage a Jew, by citizenship a Swiss, and by makeup a human being, and only a human being, without any special attachment to any state or national entity whatsoever.”

“All that is valuable in human society depends upon the opportunity for development accorded the individual.”

“Education is what remains after one has forgotten what one has learned in school.”

“Everybody is a genius.”

But if you judge a fish by its ability to climb a tree, it will live its whole life believing that it is stupid.”

“It’s not that I’m so smart; it’s just that I stay with problems longer.”

“Look deep into nature, and then you will understand everything better.”

“Once you stop learning, you start dying.”

“All religions, arts and sciences are branches of the same tree.”

“Any intelligent fool can make things bigger and more complex… It takes a touch of genius – and a lot of courage to move in the opposite direction.”

“In the middle of difficulty lies opportunity.”

“A man should look for what is, and not for what he thinks should be.”

“A person who never made a mistake never tried anything new.”

“Everybody is a Genius.”

“A human being is part of a whole called by us the universe.”

“Anger dwells only in the bosom of fools.”

“The important thing is to not stop questioning.”

“Curiosity has its own reason for existing.”

“A question that sometimes drives me hazy: am I or are the others crazy.”

“There are only two ways to live your life.”

One is as though nothing is a miracle.”

The other is as though everything is a miracle.”

To keep your balance you must keep moving.”

“Concern for man and his fate must always form the chief interest of all technical endeavors.”

Never forget this in the midst of your diagrams and equations.”

“Monotony and solitude of a quiet life stimulates the creative mind.”

“Look deep into nature and then you will understand everything better.”

“The true sign of intelligence is not knowledge but imagination.”

“When the solution is simple.”

“The value of a man should be seen in what he gives and not in what he is able to receive.”

“Only two things are infinite, the universe and human stupidity and I’m not sure about the former.”

“The only source of knowledge is experience.”

“The distinction between the past, present and future is only a stubbornly persistent illusion.”

“It is the preview of life’s coming attractions.”

“The most beautiful thing we can experience is the mysterious.”

“It is the source of all true art and science.”

“The only thing that interferes with my learning is my education.”

“Religion, Arts and Science are branches of the same tree.”

“Nothing truly valuable arises from ambition or from a mere sense of duty; it stems rather from love and devotion towards men and towards objective things.”

“The secret to creativity is knowing how to hide your sources.”

“The important thing is not to stop questioning, Curiosity has its own reason for existing.”

“If you can’t explain it simply, you don’t understand it well enough.”

“Insanity is doing the same thing over and over again and expecting different results.”

“Reality is merely an illusion albeit a very persistent one.”

“Strive not to be a success, but rather to be of value.”

“Science without religion is lame.”

“Religion without science is blind.”

“Logic will get you from A to B, imagination will take you everywhere.”

“If the facts don’t fit the theory, change the facts.”

“Most people say that it is the intellect which makes a great scientist.”

“They are wrong: it is a character.”

“Once we accept our limits.”

“We go beyond them.”

“The hardest thing to understand in the world is income tax.”

“Everyone should be respected as an individual but no one idolized.”

“Everything should be made as simple as possible, but not simper.”

“Information is not knowledge.”

“A table, a chair, a bowl of fruit and a violin; what else does a man need to be happy.”

“A true genius admits that he/she knows nothing.”

“Only those who attempt the absurd can achieve the impossible.”

“Education is what remains after one has forgotten what one has learned in school.”

“A clever person solves a problem.”

“A wise person avoids it.”

“We cannot solve our problems with the same thinking we used when we created them.”

“Any intelligent fool can make things bigger and more complex… It takes a touch of genius – and a lot of courage to move in the opposite direction.”

“Human beings must have action, and they will make it if they cannot find it.”

“Small is the number of people who see with their eyes and think with their minds.”

“The world as we have created it is a process of our thinking.”

“It cannot be changed without changing our thinking.”

“The mediocre mind is incapable of understanding the man who refuses to bow blindly to conventional prejudices and chooses instead to express his opinions courageously and honestly.”

“Truth is what stands the test of experience.”

The important thing is not to stop questioning.”

“Curiosity has its own reason for existing.” 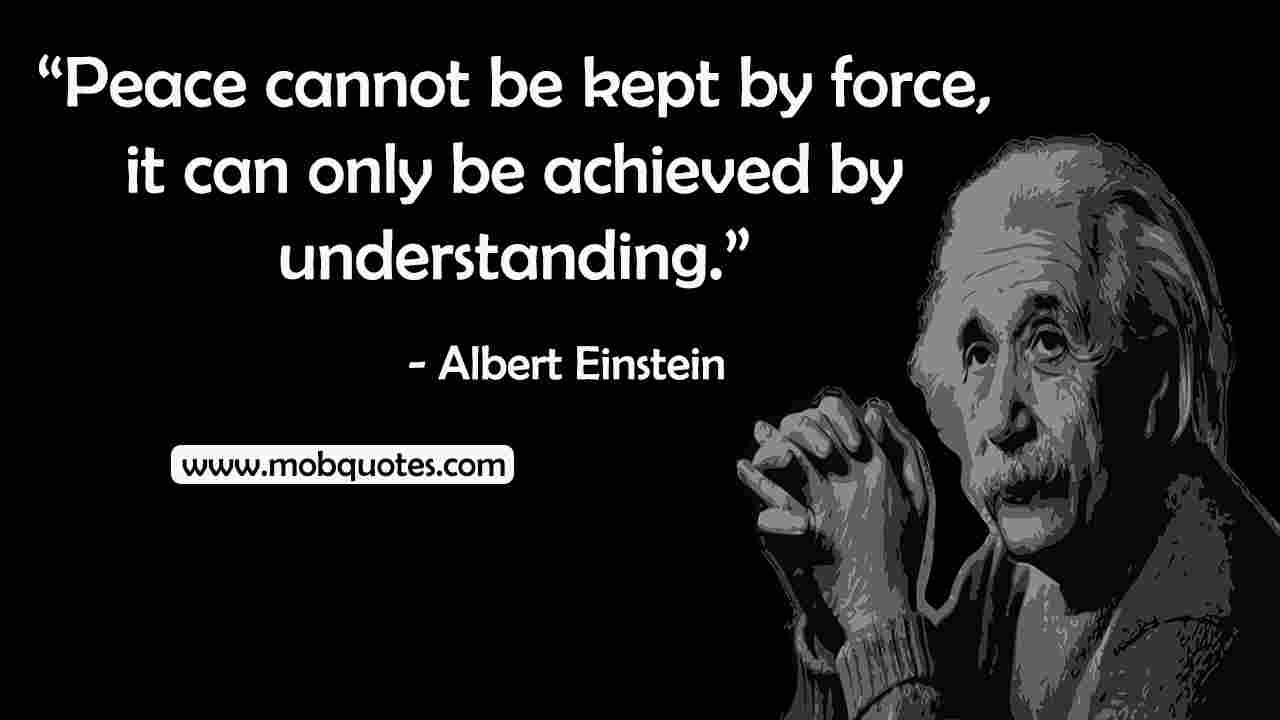 “Peace cannot be kept by force, it can only be achieved by understanding.”

“If you want your children to be intelligent, read them fairy tales.”

“If you want them to be more intelligent, read them more fairy tales.”

“Common sense is nothing more than a deposit of prejudices laid down in the mind before you reach eighteen.”

“No amount of experimentation can ever prove me right; a single experiment can prove me wrong.”

“Nothing happens until something moves.”

“You ask me if I keep a notebook to record my great ideas.”

“There comes a time when the mind takes a higher plane of knowledge but can never prove how it got there.”

“A happy man is too satisfied with the present to dwell too much on the future.”

“Any man who reads too much and uses his own brain too little falls into lazy habits of thinking.”

“As a human being, one has been endowed with just enough intelligence to be able to see clearly how utterly inadequate that intelligence is when confronted with what exists.”

Work is X; Y is playing, and Z is keeping your mouth shut.”

“We can’t solve problems by using the same kind of thinking we used when we created them.”

“I never think of the future.”

“Learn from yesterday, live for today, hope for tomorrow.”

The important thing is not to stop questioning.”

“The most beautiful experience we can have is the mysterious.”

“It is the fundamental emotion that stands at the cradle of true art and true science.”

“Memory is deceptive because it is colored by today’s events.”

“Whoever is careless with the truth in small matters cannot be trusted with important matters.”

“I’d rather be an optimist and a fool than a pessimist and right.”

“Everything should be made as simple as possible, but not simpler.”

“Only a life lived for others is a life worthwhile.”

“No problem can be solved from the same level of consciousness that created it.”

“Once we accept our limits, we go beyond them.”

“Anyone who has never made a mistake has never tried anything new.”

“The difference between genius and stupidity is that genius has its limits.”

“I think and think for months and years Ninety-nine times, the conclusion is false The hundredth time I am right.”

“Sometimes one pays most for the things one gets for nothing.”

“Two things are infinite: the universe and human stupidity; and I’m not sure about the universe.”

“Peace cannot be kept by force It can only be achieved by understanding.”

“I very rarely think in words at all A thought comes, and I may try to express it in words afterwards.”

“Pure mathematics is, in its way, the poetry of logical ideas.”

“Few people are capable of expressing with equanimity opinions which differ from the prejudices of their social environment Most people are even incapable of forming such opinions.”

“To raise new questions, new possibilities, to regard old problems from a new angle, requires creative imagination and marks real advance in science ” “In order to form an immaculate member of a flock of sheep one must, above all, be a sheep.”

“It is the supreme art of the teacher to awaken joy in creative expression and knowledge.”

“Imagination is more important than knowledge For knowledge is limited, whereas imagination embraces the entire world, stimulating progress, giving birth to evolution.”

“Without deep reflection one knows from daily life that one exists for other people.”

“It’s not that I’m so smart, it’s just that I stay with problems longer.”

“The only way to escape the corruptible effect of praise is to go on working.”

“The monotony and solitude of a quiet life stimulates the creative mind.”