Yogi Berra was an American successful professional baseball player, and his birth name is Lawrence Peter Berra. He was born on May 12, 1925, in St. Louis, Missouri, USA and died on September 22, 2015, in West Caldwell, New Jersey, USA. Here are the Best collection of Yogi Berra quotes.

Yogi Berra has done schooling from South Side Catholic High School. He plays the role of manager and coach. He played the entire 19 seasons in Major League Baseball. He was an 18-time all-star and won 10 World Series championships.

Yogi spent the next year as their manager and served four years as a manager, then joined the New York Mets as a coach. He was one of seven managers to direct both the National League and American teams to the World Series. 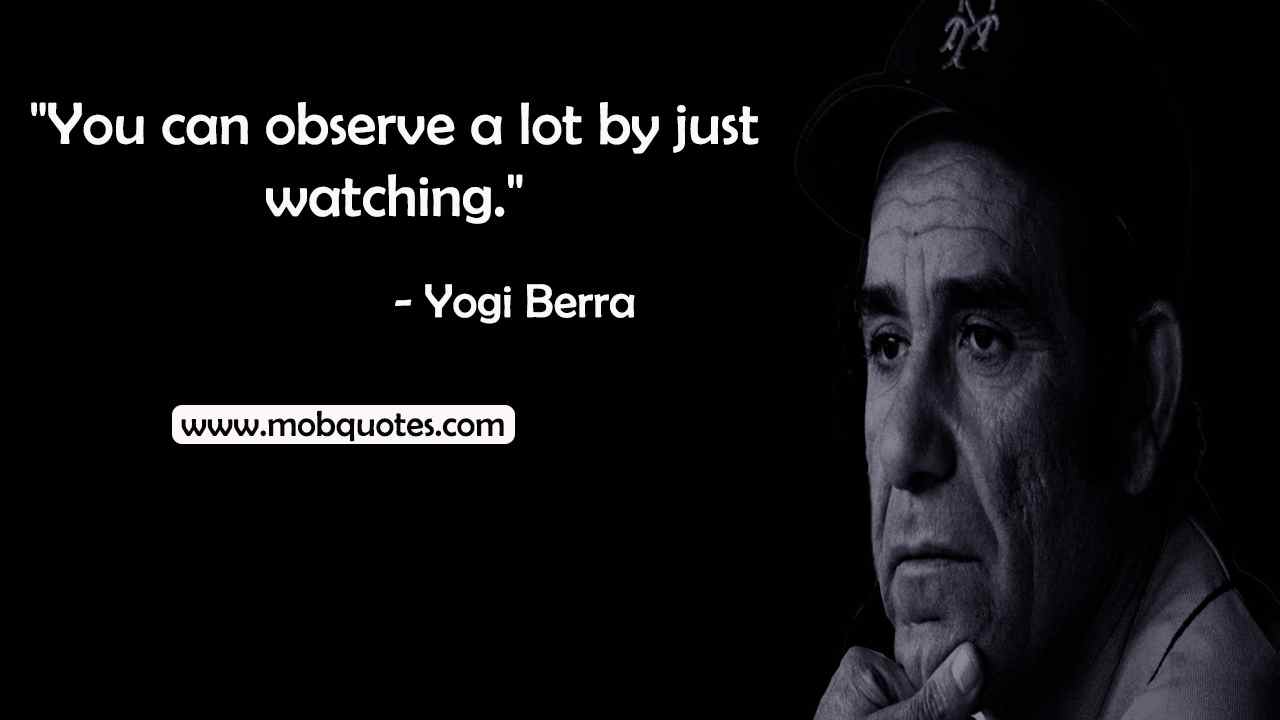 “We made too many wrong mistakes.”

“It gets late early out there.”

“Half the lies they tell about me aren’t true.”

“In baseball, you don’t know nothing.”

“The towels were so thick there I could hardly close my suitcase.”

“You can observe a lot by just watching.”

“Always go to other people’s funerals, otherwise they won’t come to yours.”

“I think Little League is wonderful. It keeps the kids out of the house.”

“I just want to thank everyone who made this day necessary.”

“You should always go to other people’s funerals, otherwise, they won’t come to yours.”

“It was impossible to get a conversation going, everybody was talking too much.”

“A nickel isn’t worth a dime today.”

“If you don’t know where you are going, you might wind up someplace else.” 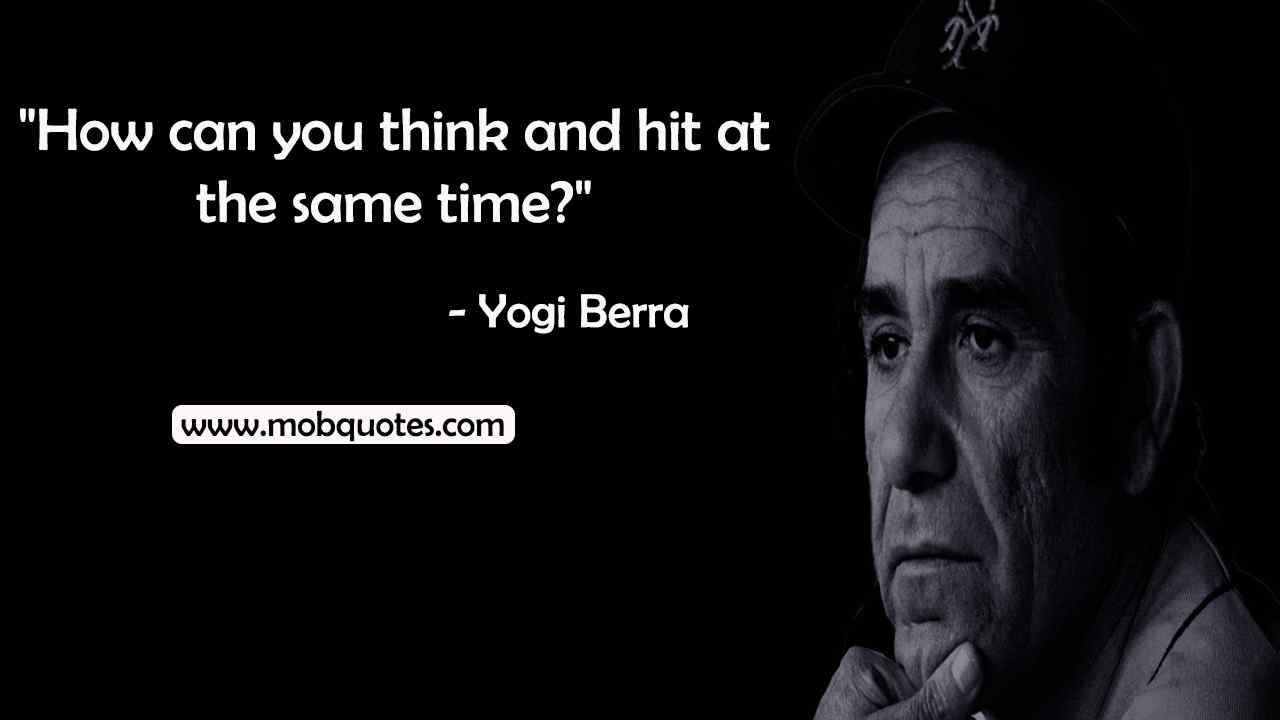 “You wouldn’t have won if we’d beaten you.”

“So I’m ugly. So what? I never saw anyone hit with his face.”

“You got to be careful if you don’t know where you’re going, because you might not get there.”

“Baseball is ninety percent mental and the other half is physical.”

“A nickel ain’t worth a dime anymore.”

“The only color I don’t have is navy brown.”

“I always thought that record would stand until it was broken.”

“I’m not going to buy my kids an encyclopedia. Let them walk to school like I did.”

“You got to be very careful if you don’t know where you’re going, because you might not get there.”

“How can you think and hit at the same time?”

“Little League baseball is a very good thing because it keeps the parents off the streets.”

“I never said most of the things I said.”

“Nobody goes there anymore. It’s too crowded.”

“When you arrive at a fork in the road, take it.”

“The other teams could make trouble for us if they win.”

“There are some people who, if they don’t already know, you can’t tell ’em.”

“It’s pretty far, but it doesn’t seem like it.” 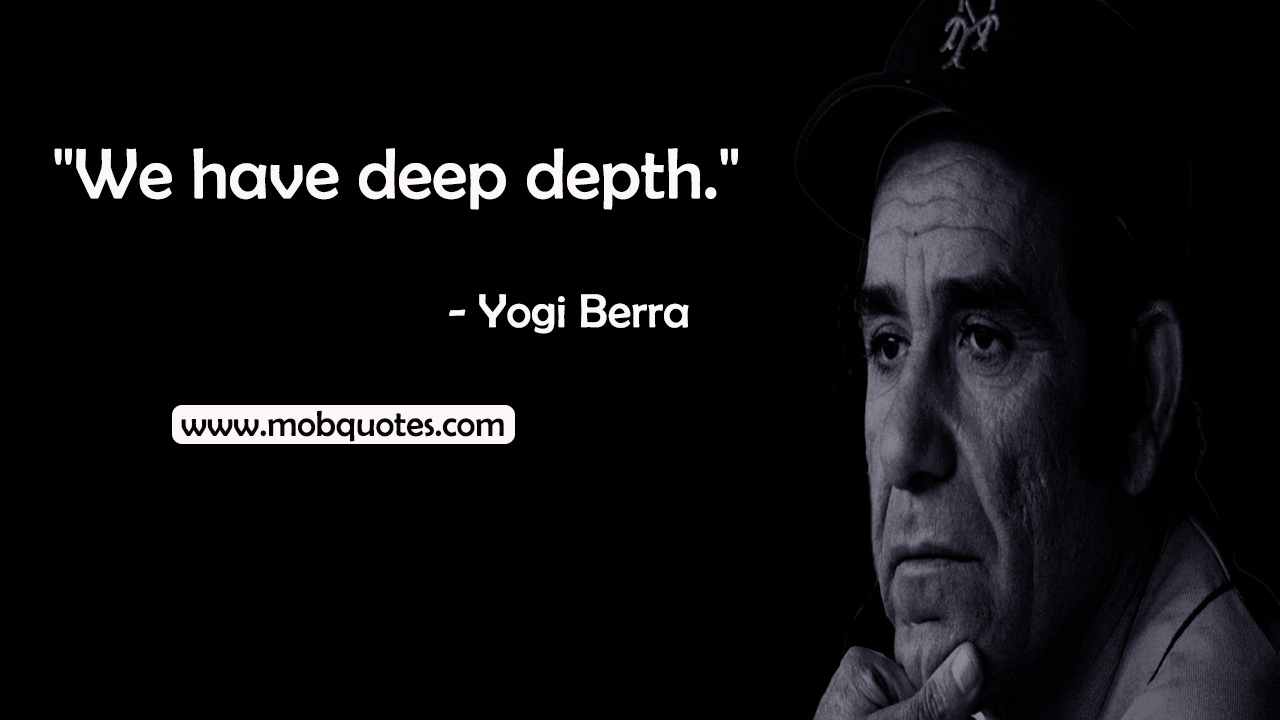 “You’ve got to be very careful if you don’t know where you’re going, because you might not get there.”

“If you ask me anything I don’t know, I’m not going to answer.”

“If the world was perfect, it wouldn’t be.”

“He hits from both sides of the plate. He’s amphibious.”

“The future ain’t what it used to be.”

“We have deep depth.”

“The future isn’t what it used to be.”

“You’ve got to be very careful if you don’t know where you are going, because you might not get there.”

“If people don’t want to come out to the ball park, nobody’s gonna stop ’em.”

“Even Napoleon had his Watergate.”

“Baseball is 90% mental, the other half is physical”

“I never blame myself when I’m not hitting. I just blame the bat and if it keeps up, I change bats. After all, if I know it isn’t my fault that I’m not hitting, how can I get mad at myself?”

“I wish I had an answer to that because I’m tired of answering that question.”

“All pitchers are liars or crybabies.”

“It was impossible to get a conversation going; everybody was talking too much.”

“It’s never happened in the World Series competition, and it still hasn’t.”

“You can observe a lot just by watching.”

“Take it with a grain of salt.”

“I’m lucky. Usually, you’re dead to get your own museum, but I’m still alive to see mine.”

If the world were perfect, it wouldn’t be.

Yogi Berra’s wife recently asked, “Yogi, when you die, where do you want to be buried, in Montclair, New York or in St. Louis?” Yogi: “I don’t know, Carmen, why don’t you surprise me?”

I usually take a two-hour nap from one to four.

“I’m a lucky guy and I’m happy to be with the Yankees. And I want to thank everyone for making this night necessary.”

“Congratulations. I knew the record would stand until it was broken.” 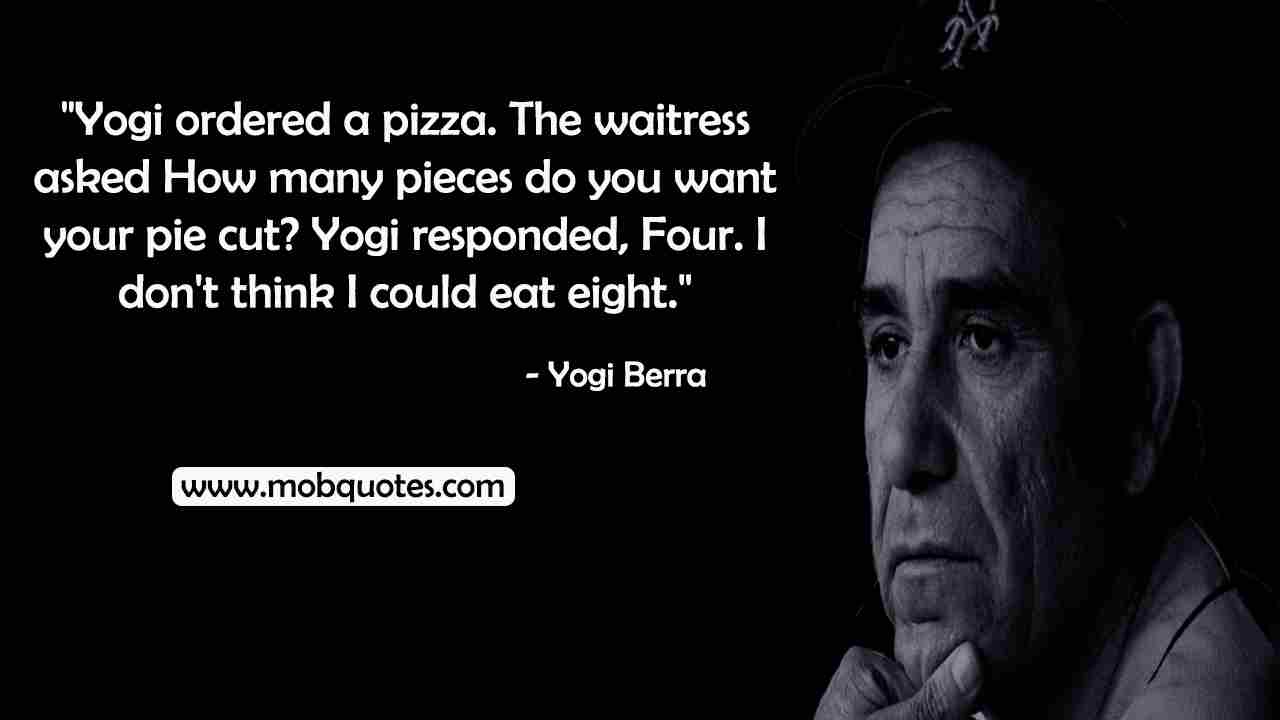 “Yogi ordered a pizza. The waitress asked How many pieces do you want your pie cut? Yogi responded Four. I don’t think I could eat eight.”

“You better cut the pizza in four pieces because I’m not hungry enough to eat six.”